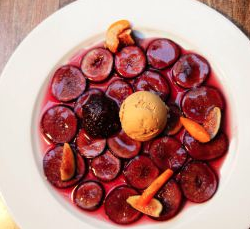 A day that begins with the dead, always ends in sex. Such is the continuity of life and the balance that goes with all things. We paid our respects to the genius of Oscar Wilde, the beauty of Edith Piaf, the mastery of Frederic Chopin and the madness of Jim Morrison at  Pere Lachaise cemetery; […]

It’s very rare that from the minute you enter a restaurant, your gut instinct goes to level 1 alert and one’s chef-dar starts beeping and not in a good way, and then from that moment on, as if on cue, the cascading effect of a monumental failure slowly starts to flow. Such was the case […]

Titan, legend, godfather, celebrity…just a few titles that adorn the legacy of Joel Robuchon, a chef who really needs no introduction and who’s empire extends from Las Vegas to Tokyo with a total collection of 28 Michelin stars (4 restaurants having 3) . Needless to say, the man knows what he’s doing and has done […]

Epicure at The Bristol, Paris

Ah, Paris in the summer would make any Briton sell their soul, with its endless days of clear blue skies and hot afternoons that lead into perfect evenings. Truly the city of love, walking in Paris is achingly beautiful and spending an evening on the banks of the Seine with a picnic of foie gras, […]

A Few Patisseries in Paris

If there’s one place in the world to satisfy a sweet tooth, it has to be Paris. Truffles and tarts, madelines and marzipan, chocolate and choux buns, the sugar addict has it all and more in Paris. Here are a few that I discovered and fell in love with. Patrick Roger: Milleur Ouvrier de France (MOF), […]

There are food markets and there are food markets. Everyone’s been to a food market whether its Borough Market in London, Boqueria in Barcelona, Aw Taw Kaw in Bangkok, Spice Bazaar in Istanbul, Greenwich, London and the list can just go on and on and on. Each has its unique charm and one usually wanders […]

I first got introduced to Pierre Gagnaire’s cuisine when I worked at Sketch and ever since then have always wanted to go to what he calls ‘ma coeur’ at Rue Balzac, Paris. He’s also probably one of the only chefs to have published a cookbook with no recipes, just surreal works of art that just […]

Ah Paris, a city rich with history and culture, home to the Eiffel tower, one of the world’s most recognizable and famous landmarks and the Louvre, the world’s largest single museum that has 16km of galleries including the wealthy Mona Lisa, worth a staggering £700 million. The city of lovers, the city of poets and […]