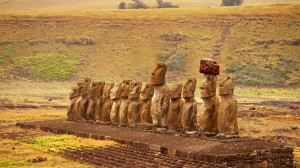 There’s something exhilarating about waking up in the morning with the sun streaming through the whisper of a crack in your curtains, reminding you that it is indeed spring and, unlike last  year, Easter will not be a snowy, wintry affair. Fortunate enough to have a garden, I often make use of my early rising to contemplate the day ahead, mostly to the tune of birdsong wafting through the trees. A couple of years ago I ended up spending Easter weekend on the island of Rapa Nui, also known as Easter Island, basking in the sun next to its guardians, the Moai (the big statues) and feeling thoroughly pleased with myself at having timed my visit so well. For the adventurous traveller, I highly recommend visiting this ancient island with its magical and mystical history and traditions, best experienced at the cultural restaurant, Te Ra’ai)

However, back in London present day, the story was very different. Both of us were in the mood for a spot of brunch on such a lovely spring day and having heard so highly of Bruno Loubet’s Grain Store in King’s Cross, decided we would give it a whirl.

Housed in the beautifully restored Granary Square, the aptly named Grain Store occupies a fairly large space ideal for the casual diner/coffee meet-up or a more substantial meal, the kind of which we were hankering for. Having read the menu the night before I couldn’t wait to try it as the food offering came across as very creative and inspired by global flavours; just the sort of cooking I love.

It didn’t take long for us to decide and I went for the Aromatic steamed bread of chickpeas and lentils with banana ketchup and Grain Store baked beans, Toulouse sausage, scrambled eggs, whilst the wife opted for the classic Croque Monsieur.

When the food arrived it looked fantastic and very appetising. The chickpea bread, unfortunately, was a dry, crusty and incredibly dense hockey puck that smelt strongly of raw gram flour. I’ve had several steamed chick pea breads which have been light, airy, moist and succulent. In India, the dhokla is just this. However, what I was served was neither light nor airy and certainly didn’t feel steamed in any way as it had a hard crust all around not common of any steamed bread. The banana ketchup was lovely as was the fresh salad that came with the bread, but neither could make the dry bread any easier to chew.

My baked beans were quite under seasoned and had no particular identifiable flavour that would help them be more palatable. A little acidity would have gone a long way as would have a juicy tomato sauce bursting with garlic and herbs. What was most disappointing was a hearty serving of dry and overcooked (rubbery) scrambled eggs. On the other side of the table, the wife was having trouble identifying what was on her plate as croque monsieur. There was barely any béchamel, the bread was alarmingly thick, the ham depressingly thin and the whole thing had been put under the grill for too long resulting in crispy cheese on top, dry & burnt edges. It would have, at best, been a sub-standard toasted ham & cheese sandwich, not a croque monsieur.

Upon calling a member of staff, I asked to return my starter of chickpea bread and my beans & eggs, outlining the various reasons for doing so and requesting a menu so I could choose something different. Promptly I was set upon by a boisterous female member of staff who I thought was management, given her demeanour and assertiveness. She set out to explain that the restaurant was very vege-centric and most people didn’t get what the food was about. She then proceeded to tell me that she was sorry I didn’t like my starter but that was the way they come and most people don’t seem to get ‘it’. When I mentioned that I my issue was not that I didn’t understand the food, but more that I didn’t want well-done eggs and that the bread was dry, she carried on in the same aggressive and rude manner intended to make me feel like an idiot for returning the food, saying that they only serve well done eggs and that my server should have told me that (this didn’t happen) and that getting a replacement would only mean I get the same dish again.

At this point I pretty much had enough of being talked to like an idiot and in a rude manner so I politely asked for the bill so we could leave. She came back and briefly apologised, saying that all the food had been taken off the bill. I mentioned to her that my problem was her attitude, the tone of her voice and giving the impression that one has to ‘like it, or lump it’ – if you don’t like the food, f%^k off cause we don’t care.

We paid the bill and were on our way when the manager of the restaurant calls me, introducing himself and reiterating what had just happened but with an even more aggressive & condescending tone than his colleague. He then went on to scold me about how I’d left the restaurant paying only part of the bill and that I should have asked for a manager to talk to about the problems with our meal. To quote verbatim, “Yes, you’ve walked off paying only part of your bill” – when I corrected him that I paid the bill of £15.19 which our server presented us, having taken the food off, and that I was offended by his libellous remark, the manager’s attitude was no different – “Well I’m sorry you didn’t like the food – it is what it is.”

So the real question here, and what’s really ruined my day, is what sort of training are the staff receiving? If there is a table with a problem such as ours, should not the manager be informed straight away so he can come and deal with it rather than calling the customer up and accusing them of not paying and being very rude about it? Should the staff be giving lectures to the customer on why their feedback is wrong and that the restaurant doesn’t care what the customer feels as long as the customer knows that the food they get is how the chef wants, and therefore, the customer should be obliged to enjoy it? Should the manager not check with his staff the details of the incident before wrongly accusing a customer in a degrading manner?

Whatever it is that they encourage staff to do, we definitely won’t be seen at Grain Store again and from what I gather having spoken to people on various social media networks, ours wasn’t an isolated incident. It seems no amount of awards or recognition seem to impart any etiquette.